When then-fourth-grader, Samantha Caminker, proposed starting a school newspaper at HDS after reading The Landry News by Andrew Clements, she likely didn’t realize that she was reigniting a past tradition at our school. Neither did I when I encouraged her and offered to be the advisor for this endeavor. It was only by casual mention that Eileen Nadler told me about one of the HDS newspapers of the past and I began to investigate this history.

Various HDS newspapers, such as the relic we discovered from 1986 known as The Big Toe, existed over the course of our 40+ year history. In 2000, Morah Eileen’s first year teaching at HDS (in fourth grade), a new version of the HDS newspaper began as an in-class writing project, to which the whole school contributed. Known by many names, such as The HDS Free Press and The HDS Times, students and teachers remember it fondly.

Robert Axelrod, whom I spoke with by phone, was in third grade when the newspaper started, and remembered the excitement of looking forward to the next grade when he could be more involved.

“There were a lot of opportunities for both creative thinking and creative writing,” he said, adding that he thought HDS would be a great place for a school newspaper. He remembered being inspired by Time for Kids. “If someone can write these, then we can make a newspaper,” he recalled thinking at the time.

Showing me a bright yellow copy of the HDS Free Press from 2001, Morah Eileen thumbed through the content. “There are article about various topics, as well as horoscopes, news on traffic accidents, puzzles, and an advice column.”

“It took weeks of class time to get each issue out,” she explained, but it was well worth it. The students all contributed, they worked together as a team, and they got to enjoy the fruits of their labor when they saw the HDS community enjoy reading the content.

“It’s funny to see that some of the themes that were relevant then are still relevant now. For example, the rivalry between the University of Michigan and Ohio State University still captures the attention of our students,” she laughed.

“It felt very grown up,” Robert recalled. They used a brand new computer lab to type up the newspaper. They took a field trip to the Ann Arbor News to see the paper being printed. He recalled the excitement of seeing all of the content copied on the yellow paper and being distributed.

The newspaper then and now, like any valuable, authentic project, takes a lot of time, effort, and support from the staff and the community. It is a lot of work for the students, especially the editor. Robert served as editor when he was in fourth grade, and his byline is all over the 10-page issue that Eileen preserved. Clearly, the project had a lasting effect on him. Robert, who chose creative writing as his profession, is a screenwriter currently living in Los Angeles. He notes that he developed “a joy in writing” at HDS that he still carries with him today.

“I definitely remember the encouragement and support at HDS,” he said. The model of sitting around the table collaborating, whether creating a newspaper, writing a play, or studying a midrash, is a model he identifies as an essential part of the many writers’ rooms and groups in which he has participated.

In education today, schools are trending toward “project-based learning,” in which students gain knowledge and skills by working for an extended period of time to investigate and respond to an authentic, engaging and complex question, problem, or challenge (bie.org). A school newspaper, started by a student and run by students, is PBL at its best. Students are gaining not only writing skills, but also fostering skills such as communication, collaboration, creative innovation, building confidence, examining content, and critical thinking (the 6 Cs from Golinkoff and Hirsh-Pasek).

As you browse through the HDS website or stroll through the JCC on a fourth Friday of the month, look out for The HDS Press. Take one from the stand, read it online, forward it to your extended family. An incredible amount of passion and hard work went into this publication. Reach out to the writers. Praise them. Offer them encouragement and feedback.

Check out The HDS Press, Issue 1, which was distributed to all students on Friday, September 29. 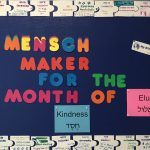 Not So Obvious by Milka Eliav, 1st/2nd and 3rd/4th Hebrew/Judaic Studies Teaching Assistant 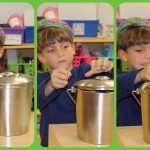 Not Easy Being Green…. But Important! By Sara Goldshlack, Resource Specialist