When Carol Gannon asked me to take on the role of liaison for the JFS Kids Fair I said “of course”! I didn’t really have any idea what a “Kids Care Fair” was, however if it was another opportunity for the fifth graders to act as role models to the younger kids, I wanted to do anything I could to help make that happen. After spending a little time most Wednesdays with the fifth grade class this year, I really felt I had a deeper bond and new respect for all of them. The roles and responsibilities they have taken on this year, I feel, is well beyond their years of maturity. They have really focused on community service.

So what exactly is a Kids Care Fair? The Jewish Family Services set up its first event to create an interactive family-service oriented learning event. The idea behind the fair was to teach kids how to serve and “give back” to the community. The proceeds from the event all went to JFS family programs such as their food pantry and counseling. Most of the activities at the fair were organized and facilitated by local youth organizations. The Hebrew Day School booth was called “Valuing Older Adults”. Our task was to have children (and many adults were quite happy to participate also) create holiday cards for older adults who are either home bound or in nursing care facilities.

During the course of the afternoon, we had the opportunity to meet some really interesting children and adults. Morah Gannon met a woman who had moved to Ann Arbor about a year ago and hadn’t really been able to make close connections with new people in the community. She shared that she is mainly alone with her two children, as her husband is rarely home due to his professional commitments. We were able to relay to her how close of a community and family Hebrew Day School is. Personally, I feel as though my HDS friends are really more family to me than many of my blood relatives. I can not express enough how thankful I am for the opportunity to create such lifelong relationships not only for my husband and I, but our children as well. We have been a part of the HDS community now for a decade! Thank you HDS for giving us an amazing opportunity to belong to something so very special. I cannot imagine next September without my HDS family. 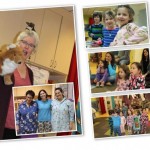 SEFER SAFARI 2015 LAUNCHED IN THE GAN!
RABBI DOBRUSIN NAMED ONE OF AMERICA’S 33 MOST INSPIRING RABBIS BY FORWARD