The much-anticipated return of the spring did not come even one day earlier than necessary.  On April 30, the HDS Mathletes braved light drizzle and wind to welcome Spring with a maypole dance.

First, the young researchers experimented with an individual hand-held pole segment and a few ribbons.  They learned how to wind the ribbons around the pole, and how the gaps or overlaps depend on the number of ribbons, the sizes of the ribbons and pole, and the angle at which the ribbon is wound.  They also learned about how the initial ribbon attachment and choices in the weaving process affect the final woven pattern.  Although Maize and Blue were, predictably, the most popular ribbon colors, there was also quite a demand for Gauzy Red and Police Line Do Not Cross.

Later, the young celebrants danced around a single large pole.  They saw how dance figures affected the maypole pattern by comparing four dances: Everyone Go Counter-Clockwise, Weave Around Every Dancer, Weave Around Every Two Dancers, and what is known technically in mathematics as Decentralized Chaos. They made short work covering not only the pole but also the hands and forearms of the mathematician holding up the pole. Time will tell if the dance was successful; as of this writing, the forecast for May 1 is sunny with a high of 72.

RESOURCES:
The basic math problems, in addition to those noted above, include the inverse problem: discovering the initial arrangements and figures that generate a desired woven pattern.  All these can be done at home with half-inch ribbon or even yarn around a paper towel core or similar found object as a table-top maypole.  In 30 minutes, we only skimmed surface-ribbon-deep into the many suggestions for activities in Chapter 5 of Art of Mathematics.

Welcoming spring works only if it is done with music–that’s what mathematicians call a “theorem.”  We used the following music, but there is lots of similar, freely available music on the web Maypole music. 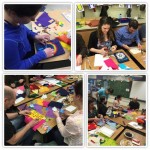 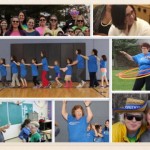