by Ali Reingold, Director of Admissions and Marketing

“The fourth and fifth graders are going to be on a basketball team!  TOGETHER!!”  For weeks, this was the cry of joy that could be heard throughout our house.  The excitement was palpable. Could it be?  Would there really be a Hebrew Day School Rec & Ed basketball team?  As the weeks went by and the registration date came closer, it seemed that this dream would become a reality.  The fourth grader who resided in our home was over the moon – could there be anything cooler than playing on an actual team with his friends from school?  And as the mom who has sat on the sidelines for years of soccer, basketball and t-ball practices and games, I must admit that I thought this was going to be just another (always pride-inducing yet sometimes taxing) season.
If you go outside on any given day at lunch recess, you will see any number of activities taking place.  Basketball is usually one of them.  Gansters and fifth graders, boys and girls, novices and experienced athletes – all working together.  Teams are formed with ease, positions determined, plays orchestrated and baskets swooshed.  So when HDS dads Craig Pacernick and Steven Acker put their extraordinary coaching skills to use, suddenly our small, co-ed HDS team (along with a few friends from Angell Elementary) hit the big league, Rec & Ed.  The kids were prepared and beyond excited.
But as a parent, there were things that I wasn’t prepared for.  I didn’t know just how much I would love to go to those games, not just to watch my own kid but to watch them all.  Or, how enthusiastically everyone would cheer for everyone, all of the time.  And when the team erupted into unbridled applause as one of the HDS players who had been filled with trepidation at the prospect of the first actual game joined the team at half time, I wasn’t prepared for how proud I would feel.  Immensely, over the moon, crazy proud of those kids, those families, this community. (By the way, the kids named the team the HDS Pride – how fitting.)
Tremendous thanks to Craig and Steven for their tireless efforts, long hours, and amazing support.  And thank you to all of the families who came to cheer on the Pride.  This is one basketball season that will stand out from the rest. 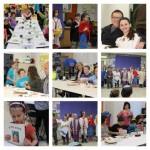 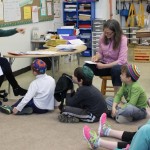