“Science has been hard at work trying to explain why singing has such a calming yet energizing effect on people. What researchers are beginning to discover is that singing is like an infusion of the perfect tranquilizer, the kind that both soothes your nerves and elevates your spirits…. (Time Magazine Stacy Horn  Aug. 16, 2013)

As a music teacher, I love the effect singing can have. When you sing, musical vibrations move through you, altering your physical and emotional landscape.  It takes something incredibly intimate, a sound that begins inside you and projects itself out of your physical body into the physical world around you. You actually feel its vibration inside yourself and at the same time hear it returning through space back to your own ears.  And when we sing together with a roomful of people, it comes back as something even more thrilling: being a part of a whole.

Scientists have said that singing can have the same effects as exercise in the release endorphins which reduce the feeling of stress. In addition, it is an aerobic activity, bringing more oxygen into the blood for better circulation which in turn leads to a better mood.

Best of all though is that it’s free.  Anyone anywhere can sing. No need for expensive equipment, or any equipment for that matter. You can sing along with others, you can sing alone. You can sing favorite songs or just make up your own as you go along. You can sing to someone else, or to something, even a pet, (my cat used to stare at me and, I swear, would lean in and raise an eyebrow at me). While many people are familiar with singing in the shower, some of my favorite places include singing in the car, in a stairwell, an elevator, or out in the woods alone.  All have great acoustics.

It’s so thrilling to me when part way through music class the student’s voices really warm up. Something magic begins to happen, something palpable in the room. The song swells with voices melding together in unison. The sound carries them on its wings and their voices really take off and fly. The singing becomes self-reinforcing; the sound and the experience make them want to keep doing it.

Often, when the students line up to return to class, they are singing or humming one of the songs from music class. Though a song ‘stuck’ in your head can be annoying, to me it is an indication that the right chord was struck, so to speak.

There is a banner in the front of the music classroom.  It’s a quote from a song, one that was part of my youth.  It sums up and expresses some of my deepest connections with singing.  “For I sing when I can’t talk and I dance when I can’t walk… “ It’s part of what I hope to pass on to our students. 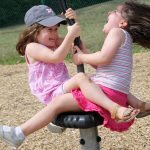 A Picture is Worth… By Ali Reingold, Director of Admissions and Marketing 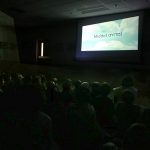