When I was growing up, my family moved every 2 or 3 years. But each and every summer, we would live in Ann Arbor to go to the doctor, see my grandparents, go to our cottage up north, and swim at Huron Valley Swim Club. I had the same swim coach for 11 years. He was a taskmaster with a heart of gold. He expected us to swim our best and to be supportive teammates. He taught us about hard work and dedication and the importance of team spirit and loyalty. For him, these weren’t just empty words; they were principles to live by, and he did. When my mother passed away when I was 32 years old—many years after he had stopped being my coach — guess who showed up at her Memorial? He did. He was an excellent coach, a wonderful person, and an even better role model.

This year, I have added a few topics in Gym, and one of them focuses on the question: What is a Positive Role Model, and do you have one? I shared with the students my experience having this role model when I was a child and encouraged them to think about who might count as a worthy role model for them.

I chose Michael Phelps as my positive role model for this year. I know a lot of you are thinking: Of course Kim chose a swimmer! But in fact that is not the reason I chose him. Michael Phelps has had to overcome many personal problems and has had to deal with the consequences of some bad personal choices. I’ve spoken to the children about setting goals, overcoming problems, and trying your hardest. I’ve also spoken with them about making mistakes and learning from them.  In this sense, Michael Phelps is a positive role model and we can be proud to have him representing our country in the Olympics and other international swimming competitions.

Another one of my positive role models right now is our Head of School, Jennifer Rosenberg. She has taught me (or at least tried to teach me!) to find a positive twist in every situation, even very challenging ones. Jen has been a constant source of positive energy and support throughout my recent illness. Thank you, Jennifer!

I have also encouraged the students to remember that they might be looked at as role models by others and to think about what a responsibility that is. I explain to all the fifth graders, especially, that they are role models for the kids in the younger grades. We have discussed the qualities a positive role model should possess, and the students have focused on: respect, confidence, loyalty, the ability to admit when you’re wrong, being a good teammate, and supporting others. I am so proud of our fifth grade role models—they possess so many of these qualities!

I hope all of you have had a positive role model in your life. Why not send them a note or give them a call and say: Thank You! 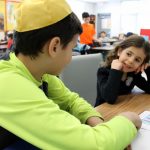 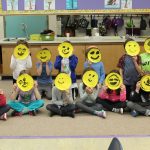 When the month of Adar arrives, we should increase our joy! By Milka Eliav Hebrew/Judaic Studies teacher, Gan and 1st/2nd grade