Do you recognize these names?  Here are some clues: 1) there are 14 of them, 2) they refer to specific children, and 3) they are published book critics.

If you know much about what is going on in our 1st/2nd grade class, you have might have guessed that these are the pen names created by our students to be used when publishing their book reviews to the Ann Arbor District Library community reviews section. As an integrated project built out of their Reader’s AND Writer’s Workshop, the students chose books “just right” books to read and critique for this relevant and real world project.

In preparation of penning their own, the children read many book reviews and considered the virtues of them. They learned about the importance of including details to support their opinions and the tricky craft of engaging the reader and critiquing a book without giving away too much.  Their writing process encompassed (among other things) composing interesting leads, revising by adding specific details, conferring with peers and teachers, and designing accurate rating descriptors.

The advent of the pen name came about to solve a specific problem, and then turned into so much more.  For obvious privacy reasons, we did not want to publish our students’ names on the AADL website but we wanted them to feel a sense of ownership of their work, and to be able to find it rather easily.  Ever the amazing teacher, Morah Janice took the opportunity to help the children understand some of the other reasons pen names were used both historically and today.  For example, she explained that historically there was a time when women were strongly advised to pick male names to ensure their work would even be read. Even as recently as 1997, the reason J.K. Rowling used initials was because her publishers were fearful that the target audience (11 year old boys) would not be interested in a book written by a female author. They went on to discuss some of the other reasons, including creating a name that was simply more interesting (Dr. Seuss) or as a way to write pointed or controversial texts without directly identifying oneself.  With the groundwork laid, the children set out to select their own pen name and provided an explanation of their choice. Tziporah was chosen because, “My parents almost named me Tziporah and it makes a connection to my family.” M.G. Rowling was chosen because, “I love Harry Potter and it’s a real writer’s name.” Daisy was chosen because, “Daisy is my favorite flower and I feel like I’m blooming as a writer.”
You can read all of their reviews here.  Maybe you’ll be persuaded to read one of their books! 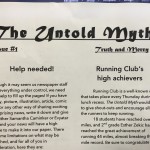 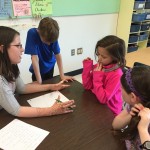 New Government Busy at Work in the 3rd/4th Grade by Jen Rosenberg, Principal