Telling and retelling, examining and reexamining, asking questions, finding new interpretations, connecting ideas to one’s life and finding meaning and messages — these are all aspects of Hebrew Day School students’ study of the parshah, the weekly Torah portion, one of the cornerstones of the Judaic studies program at HDS. Study of these texts serve to cement the foundations of Jewish identity, history, and tradition for students. With an eye toward further enhancing both the learning of its students and the beauty of its hallways, the HDS annual fundraising campaign, launched in December 2019, included purchasing a stunning artistic representation of the Torah, each panel a vibrant, colorful visual rendition depicting the story of a parshah. “The Illustrated Torah” was created in Venice, Italy, by artist Michal Meron, whose works have been exhibited in Europe and the United States in Jewish Museums, institutions, and public and private galleries. The HDS Illustrated Torah, which will ultimately be displayed in the HDS hallway, is dedicated to the memory of Dr. Ami Rosenthal (z”l). As a final act of generosity, Rosenthal remembered HDS in his estate, and his gift was used to underwrite the cost of the Illustrated Torah and serve as an inspiration to all HDS donors. Rosenthal was an incredible man and with his wife, Prue, an enormous supporter of HDS. He participated in and attended so many HDS events, always kvelling over its remarkable students. He and Prue made it possible to provide some exceptional experiences for the students, such as concerts, guest speakers, and the Traveling Suitcase, an exhibit from the National Museum of American Jewish History. He participated on our Veteran’s Day panel, sharing his experiences as a soldier in WWII. Prue and Rosenthal even playfully donned masks and capes and identified themselves among the HDS superheroes for the 2018 annual campaign. Indeed, Rosenthal was a superhero to many; he leaves a legacy of kindness, warmth, and generosity. Last spring, just as the school was in the planning stages for a public celebration and dedication of its Illustrated Torah, the pandemic hit and forced a pause in the plans. But last month, connected to the holiday of Simchat Torah, the school was presented with a natural opportunity to reveal the Torah in a way that connected it directly to students’ learning. On Simchat Torah we start at the beginning, reading the beginning of Parshah B’reishit and celebrating the cyclical nature of our Jewish calendar and our relationship to it. This was the optimal time to introduce this new piece of art and teaching tool to the HDS community. Under piercing blue skies on a colorful fall day in October, the Illustrated Torah was revealed to students and staff for the first time. In the outdoor classrooms, Head of School Jen Rosenberg, who was joined by Prue Rosenthal, spoke both of the beauty and uniqueness of the Illustrated Torah and the life and legacy of Prue’s late husband (z”l). Following some brief remarks by Prue about her late husband’s love and commitment to children, education, and Israel, the Torah was unrolled from end to end. With the song “Oseh Shalom” playing in the background, students lined up to carefully and slowly walk alongside the Torah to catch their first glimpse. As they examined the illustrations narrating the stories they’ve studied in depth, students excitedly pointed out familiar characters and scenes. “I see the animals in the ark,” exclaimed a gan student. “We just learned about that from Morah Milka.” Miles, an HDS fourth grader, enthusiastically showed a classmate his discovery. “Look! There’s Moses standing on Mount Sinai.” This meaningful celebration was a wonderful way to introduce HDS students and staff to the new addition to our building and to thank Prue Rosenthal. Hebrew Day School is looking forward to planning a larger, community-focused celebration at a later date once such gatherings are deemed safe. The HDS annual campaign, expertly co chaired by current parent and Board member Lauren Katz and alumni parent Marci Rosenberg, encouraged donors to honor the special people and milestones in their lives by sponsoring a part of the Illustrated Torah, including a book, parshah, verse, word, or letter. Thanks to the incredible generosity of parents, staff, board, and community members, and a one-to one match from the Jeffrey Farber Family Foundation and the David and Nanci Farber Family Foundation, the successful campaign ultimately raised in excess of $75,000. Combined with the generous gift from Rosenthal’s estate, these funds would go on to support both the purchase of the Illustrated Torah and the general operations of the school. 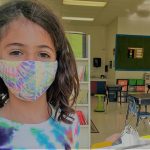 Lessons and Silver Linings in the Time of Covid by Ali Reingold, Director of Admissions and Marketing
HDS Welcomes Rabbi Will Keller as Next Head of School