Ocean Township Elementary School in Oakhurst, NJ – that’s where I spent the first six years of my academic life. It’s where I learned to climb on a jungle gym made from old tires and where my fifth-grade girlfriends decided which boy from “The Outsiders” they would marry. It’s also where my academic foundation was formed.

I’m a public-school kid. A public-school kid with an incredibly strong Jewish identity, thanks to my family, my youth group, my Hebrew school, my synagogue and in general, my East coast roots.

And since this was what I knew, what made me…well…me, I assumed that this is what my kids would know too. Isn’t that the way we often parent? We use our own experiences to inform our decisions and set our expectations for our kids.

Twelve years ago, it was time for me to put those personal experiences to good use when our son, Noah, was born. As many new parents do, we researched the best car seat and chose the most stimulating (yet not too stimulating) toys, and read books and made baby food and…the list goes on and on.

And when Noah was ready for preschool, we thought and asked and questioned and evaluated and finally chose the place that respected and loved my 2 year-old as much (I hoped) as I did. And when kindergarten was a year away, we started talking about which public school Noah would attend. Because, of course public school.

But then I got an email.

My friend Sara reached out to me. She said, “I don’t know what you are thinking for Noah for next year, but we are at Hebrew Day School and we are really happy. Can I just show you around? No pressure.”

I had already figured out Noah’s path. Or so I thought. Public school kid with a strong Jewish identity. There would be youth group and Hebrew school and synagogue and family in his future. There would be all the things that I knew how to do. All the things that had worked for me. I did take Sara up on that invitation, mostly because she was my friend and I appreciated that she had offered but not so much because I was going to seriously consider HDS for Noah.

And then something happened. Seriously, this really happened. I walked through the halls with Sara and looked at the work hanging on the walls and popped my head into classrooms and then I fell head over heels in love with this school. Because sometimes even though we can research and we can observe and we can compare and contrast and we can weigh the pros and the cons and land on any number of excellent final decisions, it is a feeling that speaks to us the most.

That afternoon as I walked around HDS I could feel the ease of the laughter, the infectious energy, the abundant happiness– flowing from the students and the teachers, turning the cinder-block hallways into joyfully colorful spaces. And so I followed my gut and made the decision to change my kid’s path because I knew where there was joy, and where Noah felt that joy, there was sure to be learning.

Hebrew Day School in Ann Arbor, MI – that’s where my kid spent the first six years of his academic life. It’s where he learned to play football and where his friends decided which basketball teams would make it into March Madness. It’s also where his academic foundation was formed, where he learned to be a mentor and philanthropist. It’s where his Jewish identity was solidified, where he was not just taught math and science and engineering and Hebrew and Torah – but also to love learning and love his community.

And giving that to my kid – well, that’s the best feeling ever. 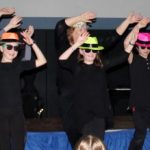 Celebrating Adar with the HDS Talent Show By Rachel Wall – Office Manager (and so much more!)