by Jen Rosenberg, Principal
Expectations are a funny thing.  I woke up on Purim morning, excited as ever.  I knew I had a day of merry-making ahead of me and I was ready to get going.  I painstakingly put on my makeup, drawing each of my zebra stripes with focus.  I got to school early with the great anticipation of watching all of the students arrive in their costumes.But…it was the quietest day ever!  None of the kids came in costume, in fact they came in their most drab, colorless clothes.  The megillah was read in Spanish and instead of drowning out Haman’s name, the kids whispered and sat on their hands.  There was no music, singing or dancing, no parades, no shpiel.  How could it be?

When it was time for recess, the kids requested to stay inside to clean the classroom, some even asked Ken if they could clean the bathrooms.  Instead of joining in the picnic lunch the teachers set up in the hall, they worked at their desks while completing the extra work they forced their teachers to give them.  When they were offered hamantashen for dessert, they declined and opted instead for carrot and celery sticks.

Enough of this nonsense, thought the teachers, and each in succession had an all out tantrum because the kids produced the highest quality of work in no time flat. The kids declined the extra afternoon recess and requested additional homework.

Finally at the end of the day, I expected to see some joy as the kids fulfilled the mitzvot of exchanging mishloach manot with each other and received the coveted mishloach manot purple bag from the school.  There was no joy in HDSville, no smiles, no thank you.  Just silence. 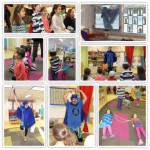